The CHN blogger was out and about at Campbelltown Arts Centre recently on a Friday night at the opening of the 2017 Fisher’s Ghost Art Award.

A packed Campbelltown Arts Centre was filled with keen supporters of the award. They walked around and viewed the art works that had survived the culling process and made it onto the walls and displays.

2017 is the 55th year of the prize and the finalists had some pretty stiff competition.

There were a diverse range of works. The categories include Open, Contemporary, Traditional, Sculpture, Photography, Primary Students, Secondary Students, Surrealism, Macarthur award for a local artist, Aboriginal, Mentorship Macability award for a work by an artist with a disability.

The Award has a total prize pool of $38000 supported by a range of local sponsors.

Campbelltown Arts Centre is well regarded art institution in the Sydney area under the leadership of director Michael Dagostino.

One entrant at this year’s award was Camden artist Sandra Dodds. She survived the cull with her sculpture work Eclipse.

Brian said about his painting:

‘One of my watercolour paintings of Crookhaven Heads on the south coast of NSW.  Over the past three decades I would have painted more than 200 paintings of the north face of this headland.  To me this work has more of a feeling of a tapestry, as opposed to a watercolour; hence its title.’

The proceedings on the opening night got under way just after 6.00pm with the official announcements around 7.30pm. The announcement of the winners was introduced by a welcome to country by a local Dharawal elder.

The full list of prize winners in all categories can be found here. 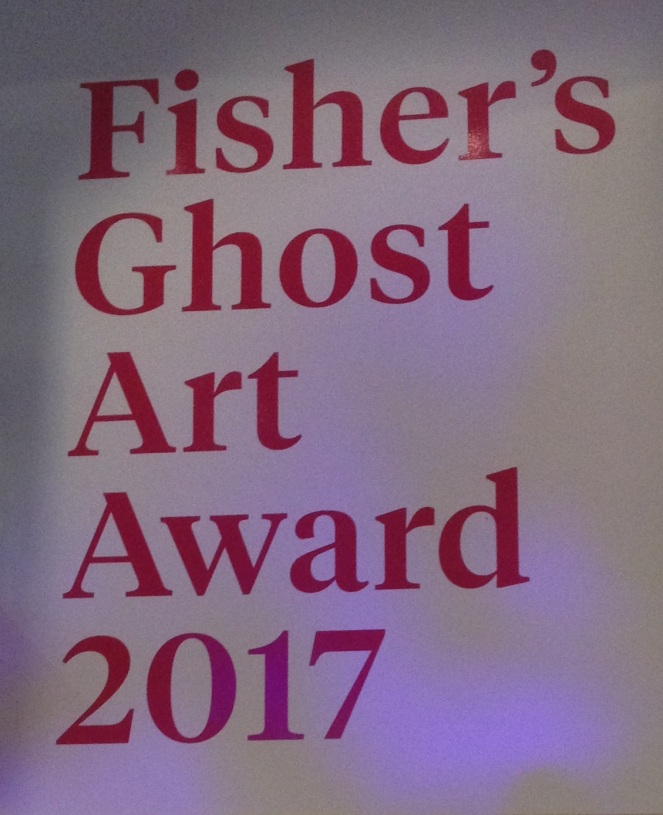 The art award is part of the Fisher’s Ghost Festival which is held in November each year and started in 1956. The festival is named after the local 19th century legend of Fisher’s ghost.

The festival website states that celebrations are held over 10 days (4-12 November). The major features of the festival are a street parade,  a fun run, a street fair, craft exhibition, foodie festival in Mawson Park, open days and a giant carnival with fireworks.

In 2017 the carnival was held on Bradbury Oval and was in full swing as the art award winners were announced at the art centre.

The street parade moves along Queen Street and has a variety of community, sporting and business groups with floats and novelties.

Each year the festival has a theme and in the past they have included  The Ghost with the Most, The Spirit of Campbelltown, the International Year of the Volunteers, the Centenary of Federation, the National Year of Reading and most recently, the 30th anniversary of the Campbelltown-Koshigaya Sister City relationship.

The Miss Festival Quest, which ran up until the early 90s, was adapted to form The Miss Princess Quest, which has now been running for more than two decades.

The story of the ghost of Fred Fisher

The festival is based around the story of the ghost of Fred Fisher.

The story of Fred Fisher is one full of mystery, murder and mayhem. It really shows the dark gothic influences in Australian history around the former convict turned farmer who was murdered in Campbelltown. The Dictionary of Sydney website tells this story and the grizzly demise of Fred.

The ghost story of Fred Fisher is part of Australian gothic literature and the country’s colonial past.   These stories make a statement about the white Australian psyche and the monster within. The landscape is portrayed as a monster in the genry of  Australian gothic now and in the past when the early colonials viewed the bush as evil and threatening.

The National Library of Australia outlines the story of Fred Fisher and the songs, stories and legends that flow from it. They claim that it is the most forgotten ghost story in Australia..

The Fred Fisher ghost story is an apt ghost story to tell around the time of Halloween. Some even go looking for the Fred ghost today.

There are many who swear that there is a presence around the area of Fishers Ghost Creek in Campbelltown. Is this just a lot of rot or is there something to the story?

The story receives the official sanction of Campbelltown Council and its public library where it is told in all its detail.

The Campbelltown History Buff has many interesting stories about Fred and his ghost. One of the best is about the ghost post from the road bridge and the curse that is linked to it. Or maybe not.

The dark stories of colonial times about Aborigines and convicts fit neatly into  the Australian gothic genre, as does Fred Fisher, a former convict.

The festival website tells the story from the colonial days of Campbelltown and the festival is fitting to remember the ghostly and ghastly past.

The festival celebrates and embraces the Australian gothic.

This site uses Akismet to reduce spam. Learn how your comment data is processed.