It is hard to imagine now but in days gone by the township of Camden was the centre of a large district. The Camden district   became the centre of people’s daily lives for well over a century and the basis of their sense of place and community identity.

The Camden district was a concept created by the links between peoples’ social, economic and cultural lives across the area. All joined together by a shared cultural identity and cultural heritage based on common traditions, commemorations, celebrations and rituals. These were re-enforced by personal contact and family kinship networks. The geographers would call this a functional region.

The Camden district ran from the Main Southern Railway around the estate village of Menangle into the gorges of the Burragorang Valley in the west. The southern boundary was the Razorback Ridge and in the north it faded out at Bringelly and Leppington.

The district grew to about 1200 square kilometre with a population of more than 5000 by the 1930s with farming and mining.  Farming started out with cereal cropping and sheep, which by the end of the 19th century had turned to dairying and mixed farming. Silver mining started in the late 1890s in the Burragorang Valley and coalmining from the 1930s.

The district was centred on Camden and there were a number of villages including Cobbitty, Narellan, The Oaks, Oakdale, Yerranderie, Mt Hunter, Orangeville and Bringelly.  The region was made up of four local government areas – Camden Municipal Council, Wollondilly Shire Council, the southern end of Nepean Shire and the south-western edge of Campbelltown Municipality.

Before the Camden district was even an idea the area was the home for ancient Aboriginal culture based on dreamtime stories. The land of the Dharawal, Gundangara and the Dharug.

The Europeans turned up in their sailing ships. They brought new technologies, new ideas and new ways of doing things. The First Fleet cows did not think much of their new home in Sydney. They escaped and found heaven on the Indigenous managed pastures of the Nepean River floodplain.

On the discovery of the cows an inquisitive Governor Hunter visited the area and called it the Cow Pasture Plains. The Europeans seized the territory, allocated land grants for themselves and displaced the Indigenous occupants.  They created a new land in their own vision of the world.  A countryside made up of large pseudo-English-style-estates, an English-style common called The Cowpasture Reserve and English government men to work it called convicts. The foundations of the Camden district were set.

The Nepean River was at the centre of the Cowpastures and the gatekeeper for the wild cattle.  The Nepean River, which has Aboriginal name of Yandha, was named by Governor Arthur Phillip in 1789 in honour of Evan Nepean, a British politician.

The Nepean River rises in the ancient sandstone country west of the Illawarra Escarpment and Mittagong Range around Robertson. The shallow V-shaped valleys were ideal locations for the dams of the Upper Nepean Scheme that were built on the tributaries to the Nepean, the Cordeaux, Avon, and Cataract. 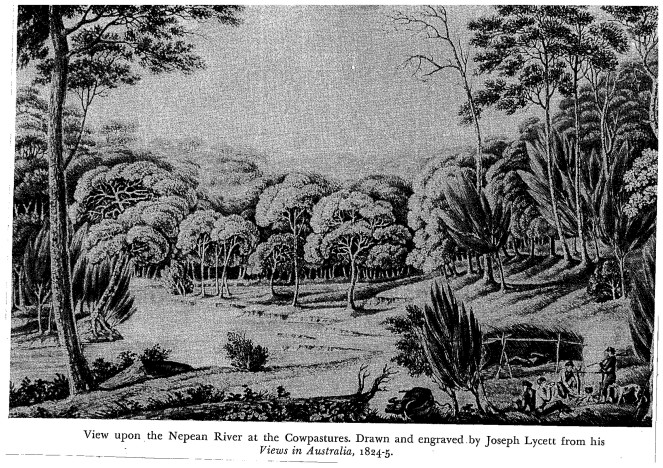 The river floodplain and the surrounding hills provided ideal conditions for the woodland of ironbarks, grey box, wattles and a groundcover of native grasses and herbs.  The woodland ecology loved the clays of Wianamatta shales that are generally away from the floodplain.

The ever changing mood of the river has shaped the local landscape.  People forget that the river could be an angry raging flooded torrent, set on a destructive course. Flooding shaped the settlement pattern in the eastern part of the district.

A village is born

The river ford at the Nepean River crossing provided the location of the new village of Camden established by the Macarthur brothers, James and William. They planned the settlement on their estate of Camden Park in the 1830s and sold the first township lots in 1840. The village became the transport node for the district and developed into the main commercial and financial centre in the area.

Rural activity was concentrated on the new village of Camden. There were weekly livestock auctions, the annual agricultural show and the provision of a wide range of services. The town was the centre of law enforcement, health, education, communications and other services.

The community voluntary sector started under the direction of mentor James Macarthur. His family also determined the moral tone of the village by sponsoring local churches and endowing the villagers with parkland.

Manufacturing had a presence with a milk factory, a timber mill and a tweed mill in Edward Street that burnt down.   Bakers and general merchants had customers as far away as the  Burragorang Valley, Picton and Leppington and the town was the publishing centre for weekly newspapers.

The Hume Highway, formerly the Great South Road, ran through the town from the 1920s and brought the outside forces of modernism, consumerism, motoring, movies and the new-fangled-flying machines at the airfield.  This re-enforced the centrality of the market town as the commercial capital of the district.

In the western extremities of the district there were the rugged mountains that made up the picturesque Burragorang Valley. Its deep gorges carried the Coxes, Wollondilly and Warragamba Rivers.

Access was always difficult from the time that the Europeans discovered its majestic beauty. The Jump Up at Nattai was infamous from the time of Macquarie’s visit in 1815.  The valley became an economic driver of the district supplying silver and coal that was hidden the dark recesses of the gorges. The Gothic landscape attracted tourists to sup the valley’s hypnotic beauty who stayed in one of the many guesthouses.

The outside world was linked to the valley through the Camden railhead and the daily Camden mail coach from the 1890s. Later replaced by a mail car and bus.

The district landscape was romanticised over the decades by writers, artists, poets and others. The area’s Englishness  was first recognised in the 1820s.   The district was branded as a ‘Little England’ most famously during the 1927 visit of the Duchess of York when she compared the area to her home.

The valley was popular with writers. In the 1950s one old timer, an original Burragoranger, Claude N Lee wrote about the valley in ‘An Old-Timer at Burragorang Look-out’. He wrote:

Yes. this is a good lookout. mate,

What memories it recalls …

For all those miles of water.

Sure he doesn’t care a damn;

Through eyes now moist and dim

That, for years, was home to him.

By the 1980s the Sydney urban octopus had started to strangle the country town and some yearned for the old days. They created a  country town idyll.  In 2007 local singer song-writer Jessie Fairweather penned  ‘Still My Country Home’. She wrote:

When I wake up,

I find myself at ease,

As I walk outside I hear the birds,

They’re singing in the trees.

But to me I can’t have it any other way,

Cause no matter when I roam

I know that Camden’s still my country home.

The end of a district and the birth of a region

A new regionalism was born in the late 1940s with the creation of the  federal electorate of  Macarthur, then strengthened by a new regional weekly newspaper, The Macarthur Advertiser, in the 1950s.   The government sponsored and ill-fated Macarthur Growth Centre of the early 1970s aided regional growth and heralded the arrival of Sydney’s rural-urban fringe.

Today Macarthur regionalism is entrenched with government and  business branding in a area defined as by the Camden, Campbelltown and Wollondilly Local Government Areas.  The Camden district has become a distant memory with remnants dotting the landscape and reminding us of the past.