I recently had the privilege of being a delegate at the 2019 Australian New Zealand Society of the History of Medicine (ANZSHM) 16th Biennial Conference Beyond Borders: Health and Medicine in Historical Context at the University of Auckland. The aim of the conference was  to view the history of health and medicine in a broad international perspective, with ideas and systems taking on different forms in different contexts.

The conference proceedings began on Day One with a traditional welcome to conference delegates at the Waipapa Marae within the grounds of the University of Auckland. 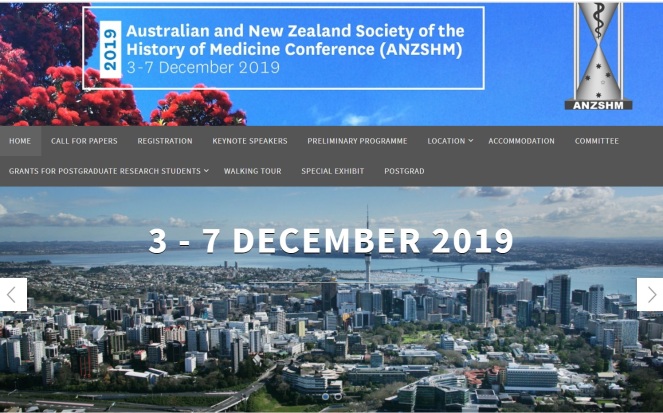 There were over 110 papers covering a range of challenging and stimulating topics that crossed the boundaries from clinical matters from the past to more general histories. Medical history attracts a cross-disciplinary cohort ranging from clinicians, practitioners, historians of various stripes, archivists, museum professionals and others. The discipline has a transnational following that was reflected in delegates from around the globe including Korea, UK, USA, Australia, Philippines, Canada, Russia, and the host New Zealand.

I presented a paper called ‘A helping hand: Red Cross convalescent homes in New South Wales, 1914-1916. In this paper I argue that the military medical authorities and the patriotic funds were poorly prepared for the outbreak of war and failed to come to grips with the issue for months. The newly established Red Cross stepped into the breach and undertook groundbreaking work in the area of soldier convalescence, initially with homestays and then eventually establishing the first dedicated convalescent homes in New South Wales.

The power of the past in the present

The European past of New Zealand is front and centre within the grounds of the University of Auckland. There are a number of important heritage buildings linked to the period when Auckland was the nation’s capital. The outstanding example is the Old Government House at the bottom of the campus surrounded by pleasant gardens and lawns.

Walking around Auckland Harbour precinct I was struck by the vibrancy of the city. In part from the upcoming 2021 America’s Cup Challenge and the growth of Pacific rim cities like Sydney, Vancouver, San Francisco and Auckland. The city has a relaxed aesthetic with a dynamic youthfulness – just like a big country town. The huge cruise liners disgorge their passengers to spend up the high-end fashion outlets along Queen Street, all within sight of the longshore wharves and container terminal.

The city fathers have not lost sight of the past and have gone for adaptive re-use of old mercantile buildings in the Harbour precinct. There are some striking examples of heritage retention that could be models for town planners in Australian cities and towns.

Tourism can provide these benefits if handled with sensitivity and an understanding that the visitor is seeking evidence of authenticity and a genuine representation of the past. The city precinct demonstrates that heritage and history does not have to sacrificed in the search for economic prosperity and job creation.